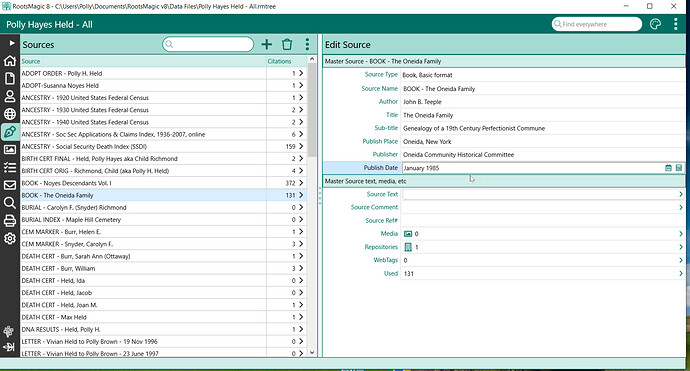 Hi PollyH,
To view the footnote from the Sources tab, click on the arrow next to the citation number (in this instance click on the “131” alongside the Oneida Family Book source). This takes you to the list of all 131 citations using that particular book source. Select one, and the footnote for that particular citation will be visible on the bottom right of the page. From here you can edit or customise the citation. 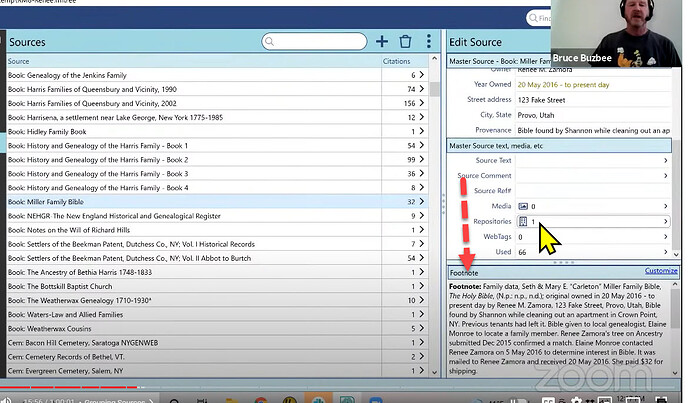 Screenshot1174×687 182 KB
JillV and Jerry,
See attached screenshot from one of Bruce’s webinars. I distinctly remember the footnote panel showing on the Edit Source screen when I have created a source. I recall that it was there when creating a source so that I could see how the source would look in any citation. That panel is indeed showing in my Citation and Citation Edit screens–I already knew that–but I distinctly remember it being on the Edit Source screen also.
rzamor1 November 12, 2022, 5:09pm #5

It used to show on the Source page under Edit Sources too. But, the Customize button should not have been there, nor could you identify which citation the footnote belonged to. It was removed in an later update.

Thank you Renee. I was beginning to think dementia was setting in.

It used to show on the Source page under Edit Sources too. But, the Customize button should not have been there, nor could you identify which citation the footnote belonged to. It was removed in an later update.

As a source splitter, in RM8 I have to create a dummy citation with no data before I can see the footnote sentence. That has been one of my frustrations in trying to move from RM7 to RM8. Essentially, I copy and paste from my footnote sentence to name the source and now that capability doesn’t exist because I don’t yet have the footnote sentence from my template available at the time I need to name my source. So I have to give a new source a dummy name and then create a dummy citation. Only then do I have the information need to replace the dummy source name with the real source name. It’s a very awkward workflow.

Jerry, I am in complete agreement with you regarding these limitations. It really makes creating new Source Templates very difficult to troubleshoot.

I am a visual learner and removing the Footnote panel from the Source Edit screen has just made it harder for me to create a source.