Example of Very Slow RM8 Performance That Is Repeatable

I have posted before about certain RM8 scenarios where it is so slow that it acts like it is locked up. My prime culprit has been Advanced Search. In an effort to avoid Advanced Search, I have tried using groups instead. But I can get the same sort of slowness when using groups. I don’t see the problem when groups are small, but I do see the problem when groups are large.

Here is a link to a screencast that illustrates the problem. The length of the video is 7:16. RM8 Slowdown Filtering By Large Groups

How many people in the whole database? I would like to compare it against RM7. Can you open a support ticket and I’ll give you a link to upload a backup.

Renee…Jerry: I tried to replicate this problem on my MBP M1 Pro using a 400 person database (largest I have). An advanced search for birth before 1980 or blank marriage seemed to finish almost instantly and I could click and edit a person whose changes got saved at once. However, RM8 does use ~40% cpu FOR ANY ACTION and then drop back down to ~15% at idle. RAM usage is moderate. There is just something drastically wrong in how RM8 executes any cpu action. 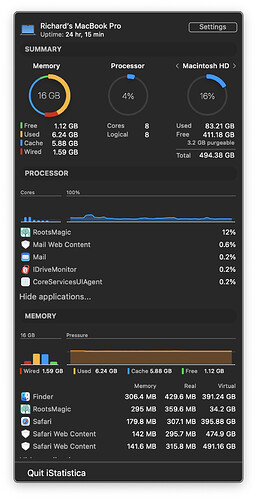 I don’t think it’s possible to replicate the problem on a database that small. RM8 will periodically burst to high CPU utilization but the burst will be over very quickly with so little data.