Media transfer from RM7 to RM8

Do you mean that you used a PDF utility to extract images out of your PDF files to store them as JPG files and then you deleted the PDF files?

Yes I deleted pdf files after making them Jpg. There are not any media links showing in RM7 missing after I add the jpg and delete the pdf. Yes I had pdf file showing in RM7 which I converted to jpg. I attached the jpg and then deleted the pdf file in RM7. I then imported to RM8 and RM8 shows missing links that are not missing links. For some reason RM8 is still picking up the pdf file ghost “link”. Don’t know why.

Are you sure you imported the correct RM7 file into RM8?

yes, only have one file to import

Yes I had pdf file showing in RM7 which I converted to jpg. I attached the jpg and then deleted the pdf file in RM7.

What was the exact process you used in RM7 to “delete” the PDF files? It sounds as if the RM8 import process was still finding them? The button to “delete” in RM7 is the Remove Media button. Is that the one you are using?

I don’t do it quite that way. If I have a PDF file linked into RM (7 or 8) and then extract a JPG from the PDF, there is a short time when the JPG and PDF files are still there on disk and RM is still linked to the JPG. Then I don’t “Remove Media” the PDF from RM. Instead, I go through the RM procedure to replace link to the PDF file to the link to the JPG file. That way, all the media tags remain in place, and there can by many, many media tags for each media file. If you add links to new media files and then remove the links to the old media files, you will also have to add all the media tags for the new media files. Is that what you are doing?

That’s sort of why I’m asking. If you literally link the JPG file and unlink the PDF file

I use the “add media” and “remove media” on the media album “page” in RM7. I don’t use any “tags”. I add the jpg thru “add media” and then I remove the pdf through “remove media”. I only replace RM8 file maybe once a week with a new import from RM7. I am going thru the pdf files and changing (extracting) them all to jpg’s, but apparently creating a new problem.

My media files are mostly pdfs and import fine into RM8 when I transfer my file from FTM 2019 via gedcom. RM8’s one real virtue so far is how well it finds and relinks missing media. Both RM8 and FTM use the same media folder of nested subfolders.

It may just be a terminology problem, but it’s hard to avoid using media tags.

There are two kinds of “links” for RM and media files. The first kind of link is actually called a link. It’s where RM links to the actual location where a media file is located on your disk (or on one of your disks if you have more than one). These are the links that can become broken and which usually can be fixed by the Fix Broken Links tool.

The second kind of link is called a media tag. It’s where a media file is connected to items in RM such as people, facts, sources, citations, names, and places. One media file can have zero or more media tags. I suppose it’s possible to have a bunch of media files where all of them have zero tags. But for the most part there is not much point in having media files linked into RM unless the media file also has media tags. So usually you will be able to go to a person and see photos for them or you will be able to go to a citation and see a media file for it such as a JPG for a census page connected to a census citation.

I wonder if you have assigned the new jpeg files with the correct media type. Your PDF files may have been labeled as a media-type file in your database. The new jpeg replacements need to be labeled media-type picture. You can see the media type when you go to the person’s fact and open media and then edit media.

They have been assigned correct media type, so that it not the problem.

Even if the JPG files were the wrong media type, that would not be the problem. RM8 can handle JPG files as type Image or as type File. There are some minor differences about how RM8 handles the two situations, but it can handle the files either way.

For some reason I think that when I delete the pdf file, there is a ghost file still out there that RM8 is importing. Not sure why that is happening.

RM doesn’t import files. It is simply a link created in the database. Just for giggles, can you import one of the persons to a GEDCOm and then open it and see if you can find a link with the non-existent file name in it.

I know that RM does not import files, but it imports ghost file links. I did your suggestion and it imported the ghost link as I figure it would. 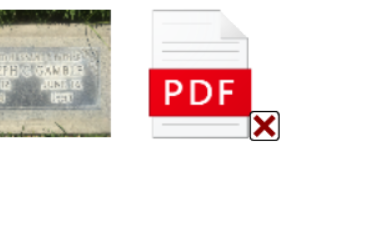 The ghost links didn’t come out of thin air. They had to still be there in RM7. So could you post two screen shots from RM7, one before deleting the PDF and one after deleting the PDF.

I didn’t want you to import it, I wanted you to open the GEDCOM file and find the link with the bad filename from there we might be able to find out where it is linked, and it is linked somewhere. To a person, to a fact, to a source citation…somewhere. RM8 doesn’t just make up links when it imports the file, at least it hasn’t until now.