Hi. I am trying to run a report based on data fields. I chose Custom Report and then edited the fields I wanted, and it says 31 individuals selected, but the report runs blank. See screenshots. What am I doing wrong? 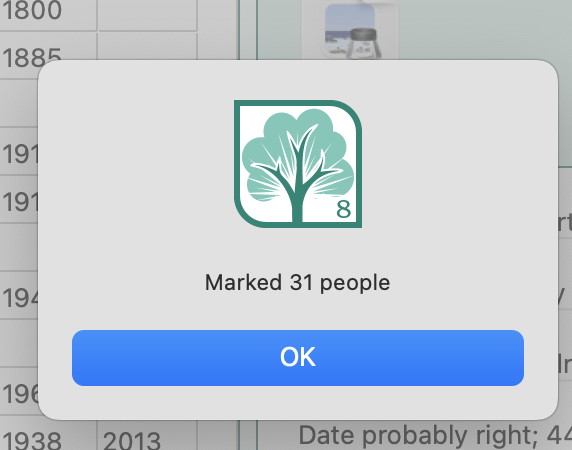 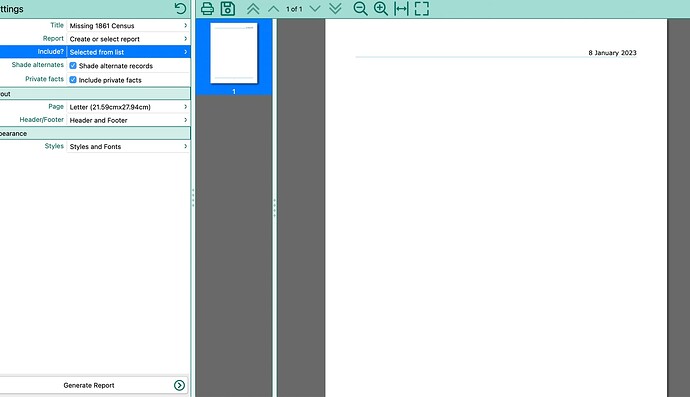 It’s hard to know for sure from what you have posted, but it looks like you haven’t actually defined a report. What you have done is selected the people to be in the report by testing for birth before 1861, death after 1861, and no census for 1861. That’s a necessary step for your project, but it doesn’t put any data into your report.

In order to define the report, you also have to define which data you wish to see as columns in the report. I have attached an example where I simply listed the person’s name to be listed. That’s probably the only column you need in your report, but you can add other columns if you wish. Then when you run your report, it will include the people you selected with your 1861 criteria. Adding the columns has nothing to do with selecting the people.

Having said all that you are probably not going to be happy with the results of your report. It doesn’t matter whether you use a Custom Report or an Individual List Report. Either way will work fine as far as the report. What is probably not going to work fine is your selection criteria for people who were born before 1861, died after 1861, and who were not enumerated in the the 1861 census. There are two problems.

One problem is that if you have people who were born before 1861 and who don’t have a death fact then they will not be selected. One way to fix that is to be sure that all such people have a death fact. Another way to fix that is to make a group. The reason is that when you are making a group, you can make multiple passes at your data. One pass can include people who were born before 1861. A second pass can exclude people who died before 1861. There is no real way to include this kind of logic in a single pass because RM doesn’t support full AND and OR and NOT logic with grouping by parentheses. You can get around that limitation a little bit by making a group and including some people and then excluding others.

The more important problem is the criterion of Census => Date => Does Not Contain => 1861. I would have said Census => Date => Does Not Equal => 1861, but I suspect the Does Not Contain would work as well as the Does Not Equal. But that is not the problem. The problem is if any of your people have additional Census facts for other census years. RM’s logic will pick up those other census facts and include people with additional Census facts even if they actually do have a Census fact for 1861. That is not what you want.

Some users including myself get around this limitation in RM’s Boolean logic by defining a different census fact type for each possible census year. If you don’t want to do that, I think the following will work.

Then run the report of your choice against that group. I think it should work just fine, although I haven’t tested it fully. Having made the group, I would look at it in People List View to be sure it looks like the right set of people. If it does, I would start with creating an Individual List report filtered by the group. Only if that report wasn’t everything I needed would I then bother to create a Custom Report with the columns I needed. Do note that you can define the columns for People List view to contain lots of different kinds of information. The People List view may provide you with enough information that you don’t need to make a report at all.

Thanks very much for the extensive and thoughtful reply! I thought it would be something like that I would have missed. However, after posting I thought of the groups solution and I have got that to work quite well. And then base a report on these groups if I want a portable list. I mainly use FTM but find RM helpful for challenging reports, which can be tricky in FTM, but having said that I got filters working there too in FTM which gives me what I want, and includes individuals without death facts from the same criteria.

Jerry described quite well how to the result can be accomplished(as usual he give very good info). Unfortunately, these type of queries take multiple steps to get the result you are looking for, and sometimes you will need to make sure the order/logic is correct or you will not achieve the desired result.