when a narrative report is generated, under each person it lists all information, birthdate, birthplace, same for death,

Why does it not list information for marriages? Or what am I missing or doing wrong?

Also, is there a way to turn off all of the information listed from the census? I would like a simple narrative report with B/M/D info for the families. All of the other info, where lived in 1900,1910,9120, etc. make it look to cluttered. Or is there a different report I should use? I like the look and feel of the narrative report I just do not want all of the census info on it.
Thank you for any help,
Michael

First, it would be very helpful to know if you are using RM8 or RM7. I am assuming RM8 for my answers.

As for the narrative report, specifically which report are you working with? This is determined by looking at the ‘Report type’ option as seen in the image attached. In my example, you will see Henry Funk and his wife, with all of Henry’s facts first, then at the very end will be the marriage info. However what you we will vary depending on your chosen ‘Report type’.

As for suppressing various facts, you can do that by editing the Fact Types. Click the little palette icon in the top right corner, next to the ‘Find everywhere’ box. Type the word Fact into the ‘Command Palette’ window and you should get only one result, select it. This will open a ‘Fact Types’ window. Choose your fact from the list and click the ‘Edit’ button. This will open the ‘Edit Fact Type’ window. In the bottom left will be some options where to include items. Uncheck the ‘Narrative reports’ option.
Narrative report option: 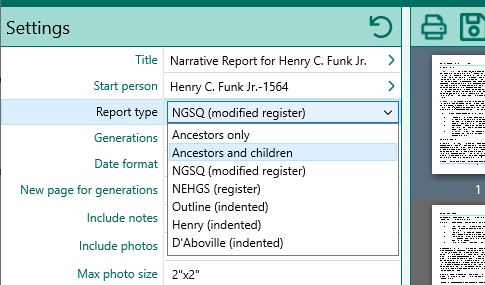 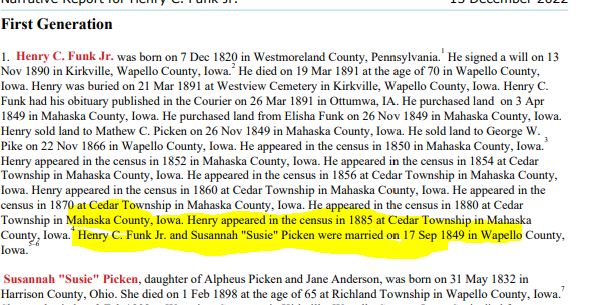 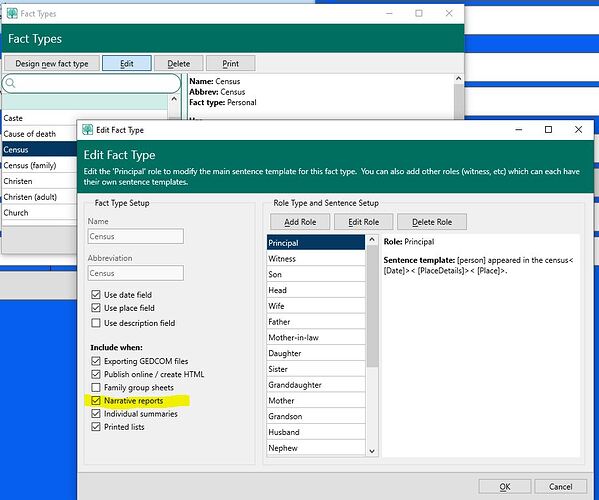 Sorry, I am using RM7

BobC,
I tried that and it still shows all census info,

I am not sure how to show a screenshot to help

BobC,
I disabled census and census(family).
Would it be considered a different fact type?

Hello all,
Thank you BobC, I disabled the Residence and Residence(family) tab and it removed the information.

Again thank you for the help

I believe Ancestry uses Census to populate the Residence fact, so if you imported information from Ancestry, that could explain that, or at some point you decided to use the census for but enter it as a residence. There is no right and wrong way to do it, but lots of strong opinions on it.

As for the marriage information, it is still very similar in RM7 as to where it prints.