I use Tree Share to sync my media between RM and ancestory and I use the multimedia list often to help organise it but since moving to RM8 from an RM7 backup it seems to be corrupting the sources and showing more than it should.

As an example
In the report, I have this (actual 4 times the same)

Citation there are 4 this is an example 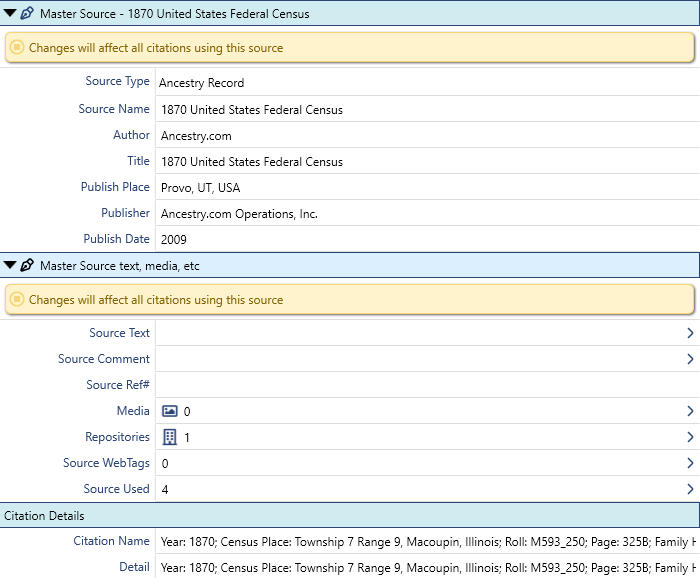 I suspect there is some corruption in the database but I’m struggling to track it down and there doesn’t appear to be a pattern to it.
All I can think of is that treeshare is adding records or the wrong pointers

If I understand your scenario correctly, your situation is as follows. You worked in Ancestry to add media to people there. You used TreeShare in RM7 do download the media. And finally, you imported your RM7 database to RM8. If that’s the correct scenario, it will have the practical effect of duplicating your citations in reports in RM8.

RM7 will recognize that citations are the same when running reports based on their footnote sentences being identical. Such citations will be deduplicated in reports if you use the appropriate report options. You are probably already doing so.

But there is a problem with RM8’s Merge Duplicate Citations process. There are some Ancestry collections where the citations that come into RM8 via TreeShare are identical except for the images being different. RM8’s Merge Duplicate Citations process does not take the difference in the images into account. The result is that citations can sometimes become merged that really shouldn’t become merged.

For a variety of reasons, I prefer to enter my Ancestry citations and Ancestry media into RM manually rather than by using TreeShare. But many or most RM users probably prefer the convenience of using TreeShare. I’m not aware of any comments from RM acknowledging this situation as a problem nor suggesting that the problem will be fixed at some point.

I’m not really sure about the extra information you are talking about where “General Register Office” that wasn’t there in RM7 seems to added in RM8. If you are importing from RM7 into RM8, nothing should be able to come into RM8 that’s not already there in RM7. If you are using TreeShare from RM8, then I’m not sure what the difference would be between RM7 and RM8 about the “General Register Office” information.

The examp,e I gave here is unique as the person is not uk but a us entry so the general registry office entry which is uk is not even valid and should never be at the same time as the census

many people wisely choose direct addition of media and data to their master database and then may upload from that to the web. Only slightly more work and no confusing cleanup afterwards.