Merge Failure - Am I doing something wrong?

RM8 I am trying to combine all of my separate trees/databases into one master database. I created a new empty file and opened the first tree/database I wanted to import. I dragged the name of the index person and dropped it into the new file. I selected to add all people from the database. As far as I can tell, that worked fine. I repeated the process with a 2nd database of a different surname from the family. Dragged and dropped the index person from that database into the new combined folder, again selecting to import all people from the database. Now I know I will have duplicates, so I choose AutoMerge. That runs and I next select Merge Duplicates. That should find people with the same name, same birth date and same death date. I do find a few people that I then merge using this. The problem is that I still have a bunch of duplicates, particularly in the direct family line as shown in the image below. The top two names are the same person - same spelling, same dates. Going back and re-running AutoMerge and Merge Duplicates doesn’t find any of these duplicates. Even when I know a duplicate person is there and I combine two people with a Manual Merge it doesn’t always remove the duplication. Have I done something wrong? Is this a bug? What’s going on? 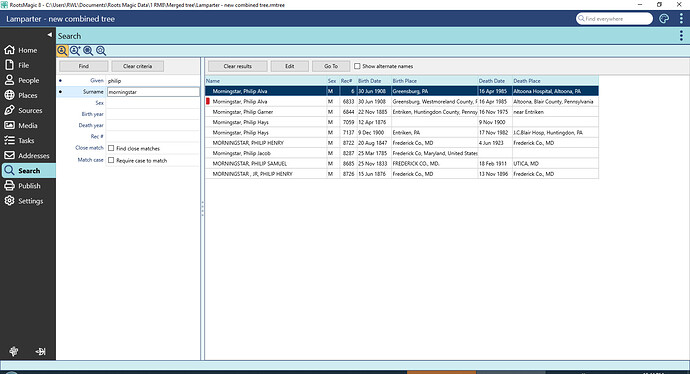 Have I done something wrong? Is this a bug? What’s going on?

No, No, and individuals HAVE to match in all key elements. You have work to do in your Place List to standardize and merge similar Place names so that they match in fact Place fields of near duplicates.

You have work to do in your Place List to standardize and merge similar Place names so that they match in fact Place fields of near duplicates.

Thanks for your comment. That’s a lot of work. Going forward using standardized place names is what I’ve been doing since I bought RM within the past two years, but the databases being merged are ones I did back in the late 1990s and early 2000s. They have many of the same root people, but I often didn’t know exact dates or places at the time in those databases. The combined file this morning is really messed up. My wife’s father had been a known duplicate. When I combined him (manual merge) with his duplicate, his children and spouse disappeared. Since I don’t have too much time invested in this so far, I think I’m going to delete this file and start over. I see that there’s an option in Merge Duplicates to uncheck the compare place names box. Hopefully that will let me find the duplicates I need to combine in order to show the extended maternal lines I’m now bringing into the combined database. I dimly remember combining trees in my old DOS genealogy program years ago and it was much more straightforward than RM8.

Well, I reviewed my place names and did my best to standardize them. After that, RM8 found a bunch of duplicates. Some of the ones it didn’t match had things like the academic degree of one individual was in the surname line and in the suffix box on its twin. Changing them to the same place allowed RM8 to see the two as duplicates of each other.