For those of you who lump, I am looking for a definitive source template for online databases. I have about 15 or 20 different variations that I have used over the years and now I want to find one really good one that I can use, mostly for Ancestry and Familysearch, but that can used for MyHeritage or other similar sites.

I would like to use one online DB template, however if it turns out that I need one for Ancestry, one for FamilySearch, one for MyHeritage, one for Fold3…etc…then so be it. No, I don’t wish to follow Evidence Explained or anything like that. There are enough folks who lump, that I am sure some of you have designed a template far better than my brain can think up. I only use RM7, so it doesn’t have to play nice with RM8.

Thank you for sharing your knowledge!

I’m a splitter, but I know from practicing RM7 to RM8 conversions that any of my templates can become lumper templates simply by marking appropriate fields as Source Detail fields rather than Master Source fields. So I don’t think source lumping vs. source splitting has much to do with the actual template design, other than choosing which fields are Source Detail vs. which are Master Source.

That being said, I don’t have a single source template that’s for an online database. That’s because I don’t consider online databases to be sources. It’s hard to know what they really should be called, but I think they are more like repositories than sources. For example, when I first started doing genealogy there were no census images online. So I got census images from microfilm. I had three different libraries and one Family History Center where I could go for census images. Other than just documenting a repository, did it really matter which library or Family History Center I went to? It’s the same microfilm. These days, does it really matter other than documenting a repository whether I get my census images from ancestry.com or familysearch.org? And for census records, there is a good argument to be made that the real repository is NARA.

So my templates are set up by record type - birth records, death records, marriage records, obituary records, cemetery records (and especially grave marker images), deed records, will records, tax records, court records, etc. And then there is a field in each template for the online database or physical place where I found the records. So the information about where I found the record is there, but it’s really a minor part of the template and I don’t treat an online database as a source. It’s more of a repository.

Could you use the source Internet and then in Citation either Ancestry, MyHeritage, FS, and so on?

Or one Source for each and in Citation transferred from there.

I think I know what you’re looking for, especially when the same collections can be on multiple websites. I like to use the source template “Website (with multiple databases)”. The database title is the lead element. I’ve been thinking of coping it and just moving more fields into the Citation area.

Check out the templates I created - Simple Citations. I created it about 12 years ago because other approaches are too complicated.

Evidence Explained is a useful place to talk about correct ways to cite various things - check out EvidenceExplained.com.

In part, their advice was:
The reason you are wrestling with this as a citation problem is that you are trying to cite the record as a book you have not used, in an archive you did not visit. The most basic principle of citation is this: We cite what we use.

You might discuss this with them in their online community forum. How easily that can be accomplished in RM8 is something I have yet to attempt!

I may be misunderstanding this advice, but it sounds to me that Evidence Explained is recommending what are sometimes called layered citations where there are two layers. The first layer is where you found the data. The second layer is where you would find the data in its original form such as the original census books at NARA (not microfilm of the census books which could be anywhere).

My experience with many online sites is that they will provide you with a citation that you can copy from the site and paste directly into a word processor or into your genealogy software. Some sites seem to provide a properly layered citation and some do not. For example, the citations that you can copy and paste from FamilySearch seem properly layered to me and the ones you can copy and paste from Ancestry are not as well layered (at least if I understand the concept properly).

But it seems to me that a problem is that genealogy software is often not very well equipped to paste these properly layered citations. Where do you paste them? They are certainly not well adapted to being pasted into source templates.

I’ve long been an extreme source splitter, so I’m perfectly ok with the procedure that’s being recommended by Genealogy Fanatics. But I do think they need to alert their viewers about this source splitting business because it results in humongously long source lists in genealogy software. On the other hand, I think doing sources and citations would be much easier doing it the Genealogy Fanatics way and it would make possible a near perfect and seamless way to transfer sources and citations between different genealogy software. But genealogy software would have to adopt this model and provide improved ways to manage large source lists. There would be a lot of history and inertia in favor of the way sources and citations are done now, so I don’t see this kind of change happening. But I think it would be great if it did happen.

Without having ever heard of GF I have kind of always (20+ years from Family Origins till now) done my sourcing with dumping the whole citation into the Footnote of a Freeform template. NEVER used any of the other templates built-in to RM.

I’m certain there is a lot I could do better, and that’s why I started this discussion with Evidence Explained, but it will be a huge effort to clean up 20+ years of work and I’m not sure it is high enough up on my work list to get the attention it would require.

I neither promote nor deride what EE says, I only responded to this chain on the RM Community because it asked questions relevant to what I was looking at and I thought other needed to get pointed to some more “authoritative” sources for this topic.

I do think they need to alert their viewers about this source splitting business because it results in humongously long source lists in genealogy software.

Treating citations simply as footnotes, forgetting about Master Sources and, now, ‘master citations’ kinda makes the Source List irrelevant. So what if it’s really long? Do I really need it if I am creating a new source for every citation? There’s no list of footnotes in a Word doc.

Now, if I wanted a Bibliography in my output, that’s going to need some pattern and discipline to keep it from exploding with variants of the same source. But maybe not worth the effort.

Well, yes and no.

Here is my source template for online databases. I created this in RM7 which transported to RM8. I use it for all my online database citations – Ancestry, FamilySearch, MyHeritage, etc. I believe it is Evidence Explained compliant. I have also attached a sample, again from RM7. I would also attach the .rmst file which, I believe, can be read by RM8, but this forum will not upload it. I also have a version for Online databases without images. Hope this helps. 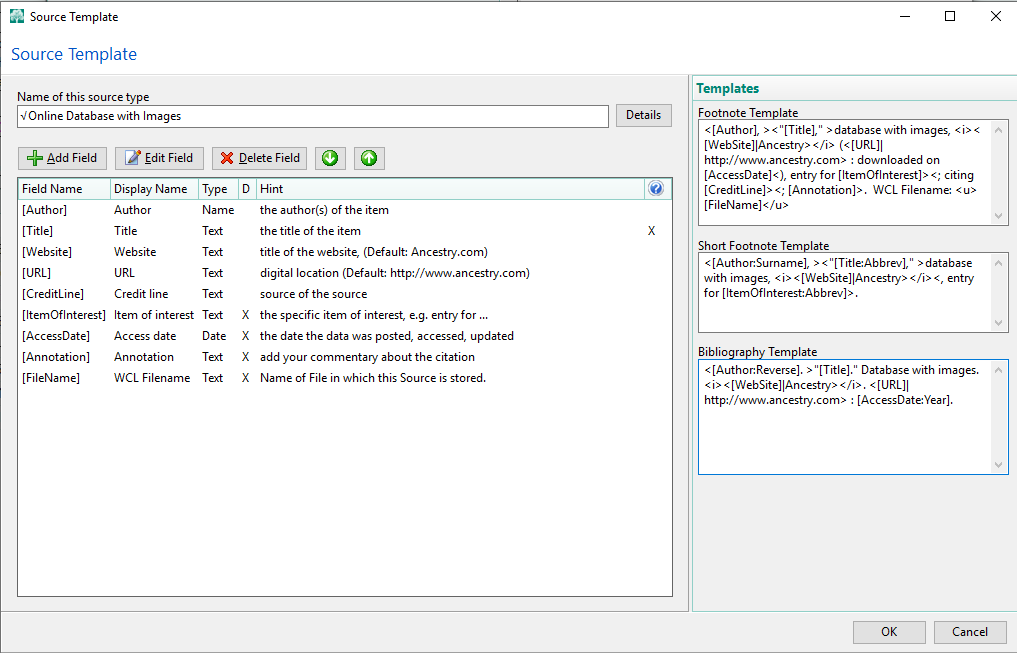 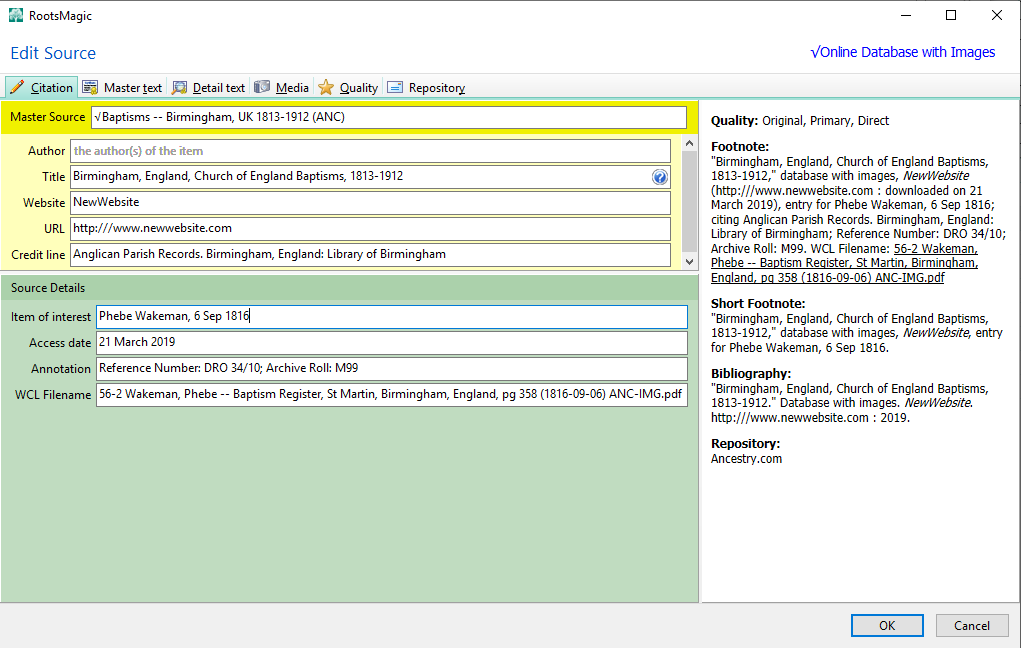