In the Ancestry app online, in the profile page for a person, there is a ‘relationship’ line, the fourth line below the picture, that will show this person’s relationship to the ‘Home Person’ in the tree. If you select this ‘relationship’ information, you get a printable page with the relationship detail. This relationship information text, and the related printable information, is also generated for persons who are not ‘blood’ relations of the ‘home person’.
Dictionary definition: Relationship: The condition or fact of being related; connection or association.
For most of my 80+ years, asking about the ‘relationship’ of a person who was married to a ‘blood’ relative would prompt a response of husband, wife or in-law, without having to provide more information.
Why is there this constraint of ONLY blood relations in RM?

Why is there this constraint of ONLY blood relations in RM?

Apparently RM chose to go with the strictest definition of related. To pick nits, genealogy is all about the blood relatives. This bothers some people who want to see RM calculate 1/2 relations and various non-blood relationships, such as steps. Will it ever happen, who knows. It hasn’t in all these years, so you might turn a little blue holding your breathe for it.

I would like to be able to show the relationship between notable persons in my tree to young members of my family without any other kinship connections, working in a non-internet environment.
Perhaps the relationship report could have a switch added, for allowing non-blood connections.

If there was a switch for every little change that people wanted, there probably wouldn’t be a program at all. Short of using the relationship calculator to calculate relations between the younger member and the ‘notable’ member, I can’t even imaging how this would be done, especially if you are wanting to do it on a larger scale. My guess is is that a snowflake would survive a day in Hades before development spent much time on a rather dubious ‘feature’. RM8 has enough problems that need to be fixed that it will likely take until RM9 to fix them all.

lets hope many of them are fixed before 8.3.x, RM 9.x.x is a loooonnngg way off I would imagine. However, having used other software there could be a balance. Some relationship could be meaningless but can still give context. For example, Father of husband of aunt of wife. (So father in law of my wife aunt). The problem I sometimes face with RM, is I start reviewing family groups I am less interested in. I can create groups to help minimize this and then filter by groups to help me focus on the lines I am most interested in. So I guess maybe adding some kind of stop light icons to indicate: "by blood, close in-law, distance in-law, no relationship found would* be helpful vs the exact ‘shortest’ path (sometime there can be multiple paths.

“father in law of my wife aunt”

re the above. I am always interested in how people regard in-law relationships in the case of divorce. Let’s call this guy Fred. If said aunt gets divorced and re-marries then Fred is no longer her father-in-law, she has a new father-in-law that is the father of her new husband. Would you expect RM to then change the relationship from close in-law, or distance in-law, to no relationship found?

Good Question. First if a couple has children and at least of of them is related by blood — the children will always be related regardless of “feelings”. DNA say they will be related as well as any descendants thereof. The spouse who was not related by blood and then marriage ends… this might depend on if a divorce or marriage had ended. Now you pose an interesting question of how different software might handle that timeline sequence of events. Before the divorce “by Marriage” would seem to be accurate, but would about after? RM has about 4 or 5 “Labels” for spouses, Often I do not know when a couple was divorced (or even if they were officially divorced). Maybe someone who know more about RM (8 and/or 7) can answer this because I would only be guessing without experiments with some of my database

“father in law of my wife aunt”

re the above. I am always interested in how people regard in-law relationships in the case of divorce. Let’s call this guy Fred. If said aunt gets divorced and re-marries then Fred is no longer her father-in-law, she has a new father-in-law that is the father of her new husband. Would you expect RM to then change the relationship from close in-law, or distance in-law, to no relationship found? 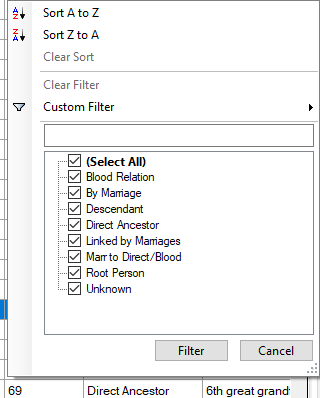 This is a very interesting topic. I’m sure this discussion could go on forever with all possible relationships. After all, everyone in the world who is, has been or will be, is related by DNA to some extent. I don’t think anyone will ever find the records on all those people ;-(0

Just to see how RM8 handles kinship (in relation to kevync1985’s list of possibilities), I ran a report on myself and came up with a list of 351 “kin folk” so far, covering only 5 generations. Interestingly, these include all blood relative, of course, and:

So, by RM’s classification, I have a bond with a spouse of a grandniece whom I will likely never meet, and a former daughter-in-law, yet I have no bond with my sister-in-law’s husband, whom I call my brother-in-law and speak with frequently.

This was an interesting dive into relationships and is not a criticism of RM, just an illustration of how far we could go down this rabbit hole and never come to an agreement as to whom we are related.

I’m just amazed at how complicated these family tree programs get and am grateful for the coding genius that puts it all together and graphically presents it in an understandable manner.