The Wisdom of Yogi Berra, observing a lot just by watching

I was just reviewing a project where I was trying to find death certificates for everyone on my database who died in 1908. As a part of this review, I made a group of everyone who died in 1908 and I displayed that group in People List View. I’m continuing to use both RM7 and RM8 everyday so I was looking at the group in both RM7 and in RM8.

In accordance with the wisdom of Yogi Berra who said “You can observe a lot just by watching.”, I was just “watching” my group in both RM7 and RM8 with the following observations. 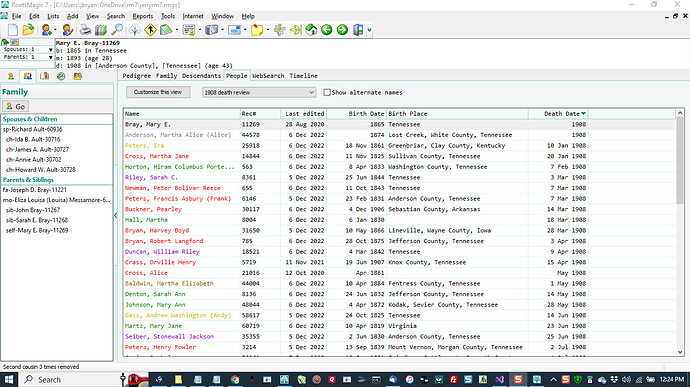 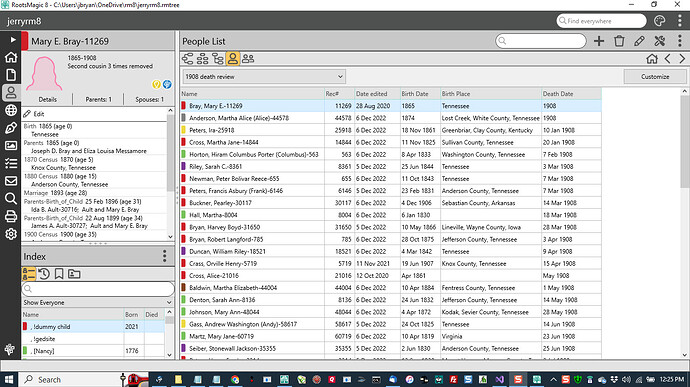 All your opinion of course. Personally, I prefer left justified, like reading a book, easier to read. It is how I set up my Excel spreadsheets too. I prefer colored blocks to colored text. I find colored text jarring, making the name harder to read. Is left aligned text in a book more readable than center aligned?

From the time that we were wee’uns, we learned numbers right justified. When we did our sums, we had to line up the 1’s column, and the 10’s column and so forth. Personally, I expect numeric data to be right aligned. Dates are essentially numeric data and as such, I would expect them to be right aligned. We grew up learning to read text from the left, so I am fine with left aligned text. Reading a book is somewhat different than reading numbers.

The highlighting style used for the the highlighted line is much stronger and easier to see in RM7 than in RM8.

I didn’t realize until some time after I posted the message that the stronger highlighting in RM7 isn’t visible in my screen capture. For some reason, the screen capture process loses the strength of the highlighting. But the difference I’m talking about is real. I’m sure that anybody who has used both RM7 and RM8 can see the difference. I really hope the strong highlighting feature in RM8 can be tweaked so that it’s practical actually to use it.

Thanks for the detailed observations.