I watched the video on using RootsMagic To-go, which was for RM6. Then I tried it out with RM8. The functionality is probably the same, but the screens in RM8 are less detailed than in RM6. So after I make a test change in the RMTG data file, and open it on my computer to transfer the change to my computer data file, it shows there is a difference (a “conflict”?), which is great, but when I go to resolve it, I can’t tell if it’s transferring from the flash drive (RMTG data) to the computer (RM8) or vice-versa! It just shows it as resolved.
The screens in RM6 made it very explicit as to which way the data was flowing. (Here is a screenshot from the RM6 video.) 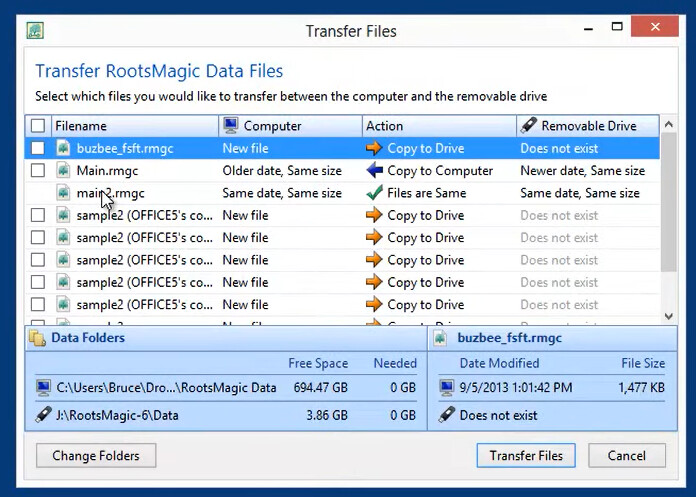 the wiki walks you thru it …

Yes, I did see that. I think the key takeaway is not to make changes in both files (computer & flash drive) or the system won’t know which version to use. There’s also the uncertainty that occurs if you happen to open one file (even if you don’t make a change) and have made a change in the other file. Apparently that will result in a “Conflicted” state, which the user has to resolve (I’m not sure how that would present on a screen for resolution). I guess I was just hoping for the same screen layout as in RM6, which makes it super clear what’s happening. I’m new to all this – just bringing up questions when I come across them.

Correct - “not to make changes in both files (computer & flash drive)”

The idea behind To-Go is that you wouldn’t need to install RM on another computer (perhaps a cousin’s) you would just run RM from the flash drive. Make any changes to the database and then when you get to your computer copy it over to your pc. Use 1 or the other but not both. Don’t make changes on To-Go, make different changes on your pc without and get them out of wack.