What I am attempting to do is the pull the source info for the Census. I already have the info in RM. But I do not have the source/citation. I can do this manually, but thought I could do it from this screen. RM does not apparently allow you to select CENSUS (on RM) from the Fact to Update box. I am guessing this is by design which makes sense in most cases. I do not want Census Fact Type for residence. I suppose if RM allow Residence and Census to be used interchangeably that would resolve my challenge. Below is screenshot and I give a brief explanation. Hopefully it makes sense:

Ancestry has 1930 (and 1940 Census info) – I want to update to my census facts NOT residence facts. The only residence fact RM has is for 1951 and the Popup box does not allow me to choose anything other than 1951 residence. SO it appears I am stuck with do this manually. Just wondered if anyone found a work around 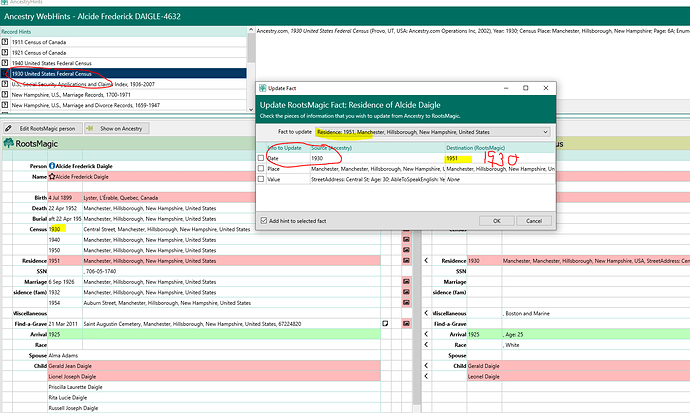 It may not be exactly what you want, but I think the following would work.

Here’s another variation I think would work.

There really isn’t a way with WebHints to bring a source for one fact in Ancestry directly down to a different fact in RM. I use RM’s WebHints very heavily to find things, but I still do all my RM data entry completely manually without doing it through WebHints.

I was trying to experiment – I was expecting that I probably would only be satisfied with the result of doing manually. Though for other users who use the Web hints. I still do not understand why Ancestry using Residence vs Census – but that has nothing to do with RM. I guess I am going to go with my original plan to avoid all the weird scenarios — but may look at memorizing vs copying citations etc. to use as needed.

but may look at memorizing vs copying citations etc. to use as needed.

Definitely look at memorizing and pasting citations. The same census citation (and the same obituary citation, etc.) are likely to be useful for multiple people and facts.

RM7 had Memorize and Paste. RM8 has Memorize and Paste/Copy or Paste/Reuse. For most RM8 users most of the time, I think they will want to use Paste/Reuse. That way, there is a single citation that is used multiple times. If you need make a correction, you only need to make the correction once instead of every time use did a Paste/Copy. Also, with a Paste/Copy, otherwise identical citations in RM8 will not be combines as endnotes.

Thanks – I am also thinking of maybe using an SQL(ite) script to do some or most of the work. Either way I need to understand the pro/cons of Memorize and Paste/Copy or Paste/Reuse etc.

method #2 is what I do. I pull the whole fact from Ancestry update it to Census fact, then standardize the place name and if there I put the street address in place details.

Eventually I’m going to parse the addition details from the description and place them in individual facts. (for example occupation).