Media Thumbnails Out Of Focus

Is there a reason why my media thumbnails in the Edit Media screen are out of focus. I can only see them clearly in the View Image Screen.

What do you mean exactly by the “Edit Media screen”? RM8 doesn’t really have an Edit Media screen. If you click the Edit icon for media (the pencil or crayon), RM causes the media file to be opened by the default Windows or Mac program for viewing media files. So it is that program which must be showing the out of focus image. But my experience on Windows is that my default Windows program for viewing media files shows them very crisply and in focus.

Jerry,
I don’t know if it helps, but I am attaching a screenshot (hopefully) from which you can probably see that the images are slightly out of focus. I also attach another screenshot of the fully opened image which, as you can see, is in focus. I can confirm that the images in my Windows media files are also in perfect focus. Just wondering why it is happening. Not the end of the world if it can’t be fixed, but annoying nontheless. 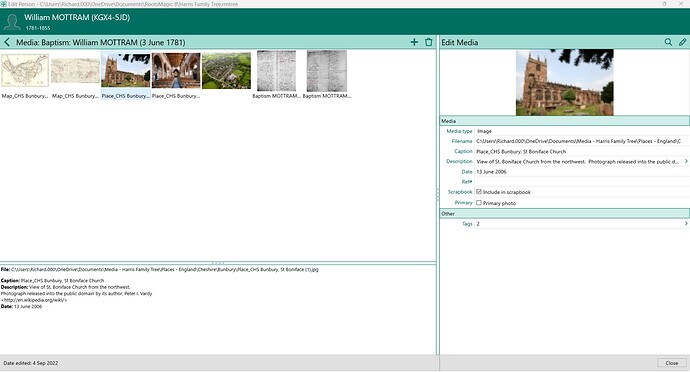 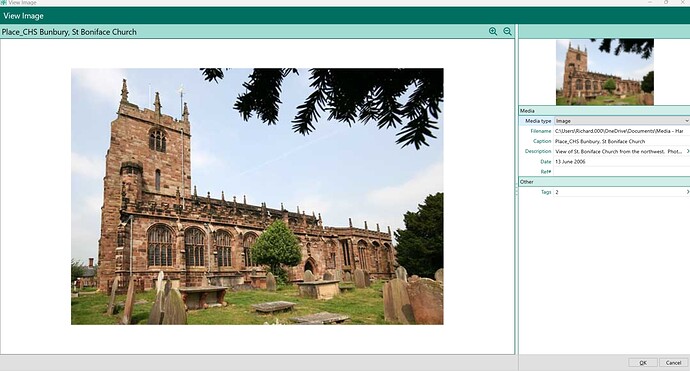 So perhaps there is a terminology problem.

The large image in the left hand panel is being displayed by RM’s internal image viewer. It is full resolution and therefore can be seen clearly. I think this is the one you are calling the View Image Screen.

The smaller image in the right hand panel is being displayed by RM and is a display of the thumbnail for the image. A thumbnail is a much smaller file then the original image file and therefore has much less resolution. Indeed, a thumbnail is really designed to be displayed in much smaller space than RM is using for this thumbnail. When you display a thumbnail file larger than it is intended to be displayed as RM is doing, it becomes pixelated and fuzzy, which is precisely what you are seeing. This is the one you are calling the Edit Media screen.

The only thing that RM might do to make the smaller image in the right panel a little more clear would be to display a smaller version of the original image rather than displaying the thumbnail. I do that on my own Web pages where I have a large version and a small version of the same image file rather than having a large version and a true thumbnail version. I simply tell the browser to display the same image in a smaller space. The smaller version cannot possibly have as much detail as the larger version because there are not enough pixels. But doing it the way I do it on my Web page, the smaller version serves the function of a thumbnail while still having much more clarity than a true thumbnail.

When I saw your reference to the Edit Media screen, I thought you must be talking about what happens when you click the Edit icon for images - the pencil or crayon icon. I didn’t realize you were talking about the right hand panel. So my apologies for that confusion of the terminology. As I said, the problem you are seeing is that a thumbnail is being displayed by RM in a space larger than a thumbnail is intended to be displayed. The only solution would be to display a smaller version of the full image in the right hand panel and not even to have true thumbnails at all.

Jerry,
Thanks for your explanation which clarifies the situation.
I mistakenly thought that the fuzzy picture was a smaller version of the original image and therefore couldn’t understand why it wasn’t clear. I didn’t realise that it was an “over-enlarged” thumbnail.
It’s unfortunate that RM chooses to display them that way, but I guess I’ll just have to live with it.