I’m getting an error when I try to import from Facebook.
I updated Edge. What is the fix for this? Thank you 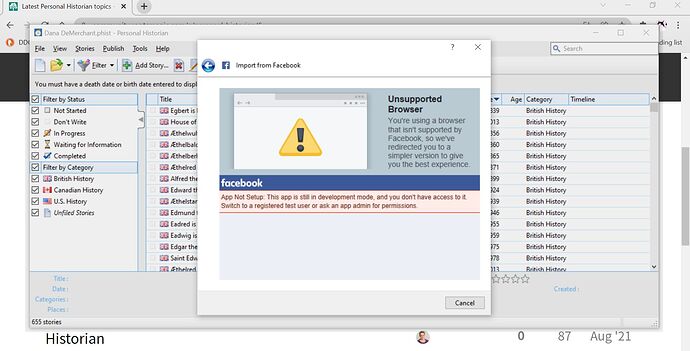 Are there support staff the monitor the forums?

I get this error message after connecting through PH3 to Facebook for import. 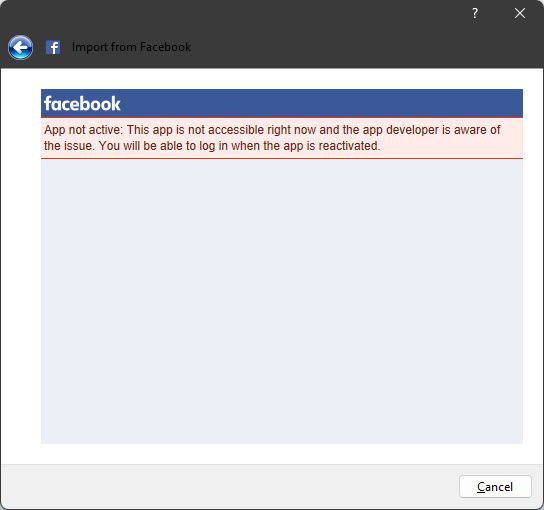 Thanks for the suggestion. I tried first logging into Facebook (through Chrome, Edge and the Windows Facebook app), then trying PH3’s Facebook import feature. I encountered the same error, except that the content of the error window which popped up was somewhat different than the one that I reported in my previous posting: 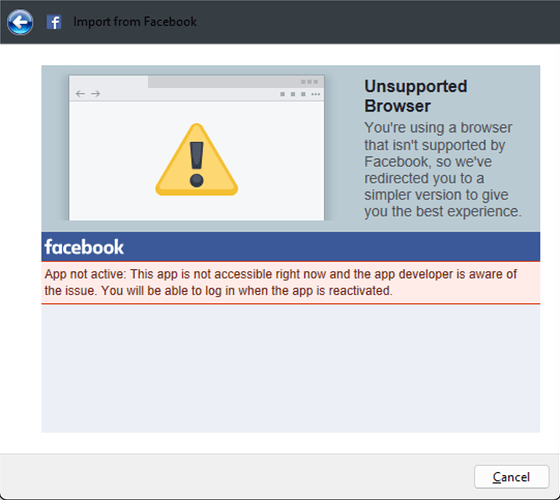 I also tried (1) disabling 2-factor authentication in Facebook, and (2) whitelisting both, PH3’s installation folder under ‘%SystemDrive%/Program Files (x86)’, and my PH3 data folder, in my antimalware app. Again, the problem continued as before.

Can you offer any other ideas?

When you were last logged in did you check the box for automatic login? That maybe what’s causing the issue now.

Do you mean when I last logged in through PH3, or a browser?

When I login to Facebook through a browser or the Windows app, I normally do select the option to remain logged in. Do you think that that is somehow interfering with my ability to log in through PH3? If so, please let me know, and I will ensure that I am logged out in the app and all browsers, then try again with PH3.

I meant with PH3 login. If you didn’t check that option then it’s probably some security software on your computer. What operating system are you using?

The security software that I am running is Malwarebytes version 4.5.18.226. In an effort to solve my PH3/Facebook import problem, I recently whitelisted both, PH3’s installation folder under ‘%SystemDrive%/Program Files (x86)’, and my PH3 data folder in Malwarebytes. This had no effect on the problem.

After reading your last post, I shut down Malwarebytes, and tried again. Again, no effect.

I don’t recall ever successfully logging into Facebook through the PH3 import feature, but if I did and have forgotten, and if you suspect that some remnant or record of that previous login could be causing my current problem, is there a way that I can correct for that on my end, or would it have to be dealt with by Facebook?

Thank you for your help.