I have a lot of German and Dutch names in my database after a GEDCOM import. These names often contain small words like ‘van’, '‘van der’ or ‘de’. They have been added to the surnames, but the normal way to alphebetize these names is WITHOUT those words. Now, a lot of my surnames end up in the ‘V’ part of the index. That is confusing. Only a few Canadian emigrants entered their names as ‘VANDEVEN’ instead of ‘VEN’. Is there a quick way to fix this or do I have to change each individual person?? And also: WHERE do I put it?? The least inconvenient way would be the Suffix (to make the lst still readable), but is there a better alternative???

Quick way? Not within the RM UI. I would use SQLite queries on the database itself for batch updates but construction of them could be tricky. Another might be regular expression search/replace on a GEDCOM using a text editor but I think that’s even trickier.

A better alternative to the Suffix? Maybe append to Given. Then, at least, wherever the full name is outputted, it reads properly.

These small words you mentioned are a part of their surnames and you should respect that. You could use the addition Alternative name to have it sort otherwise in the alphabet too.

Yes, I know, but they interfere with the alphabetical list, so I decided the first advice was better for me. I used to put them as ‘middle names’ but that option seems not to exist in RM8, only the Alternate name you suggested.

Middle names are those following the first space character in the Given Names field.

It’s not a Middle name, of course, but these words are not called suffixes, either. A family name like ‘Van Gogh’ would be in alphabetical order behind the F and before the H… In Dutch, that is. In RM it is placed with all the other V - names which really makes a mess of things.
They might be called prefixes, but those would be placed in front of the (concatenated) full name by RM (by any English program, really. Even Google doesn’t solve this problem) like Dr of Ir or MA …
Perhaps this would be a feature request rather than a question. One might call this an ‘insertion’ , perhaps. Or a ’ family name preposition’. Anyway, there doesn’t seem to be a reconciliation between English speaking programs and European culture. I personally think this is an oversight… In fact, the problems go much further than ‘de’ or ‘van de’ or ‘von’ in just German or Dutch. French, Italian, Spanish, they all have these kinds of family name prepositions… That’s really what they are. Of course they belong to the surname, but they are prepositions to the surnames and as such they could be treated with a special (new) field in the database. (or by a programmable option to leave these parts out of the alphabetization…)
Prepositions like these are common in Europe and one can find thema in any of the languages besides English (although the O’ in O’Connell might be considered one, also) ; "al; am, auf, aus, ben, bin, da, dal, dalla, della, das, die, den, der, des, deca, degli, dei, del, di, do, don, dos, du, el, i, im, L, la, las, le, les, lo, los, o’ , tho, thoe, thor, to, toe, unter, vom, von, vor, zu, zum, zur "----need I go on???
After doing some research online I came to the conclusion that another name for this could be the Nobiliary particle… See Nobiliary particle - Wikipedia , although my advice would then be to call it a Particle and leave that nobility thing out of the equasion… In the Dutch example ‘Van Gogh’ the word ‘van’ has nothing to do with nobility and is just an interjection.
Another suggestion would be affix: List of family name affixes - Wikipedia
Something like this: 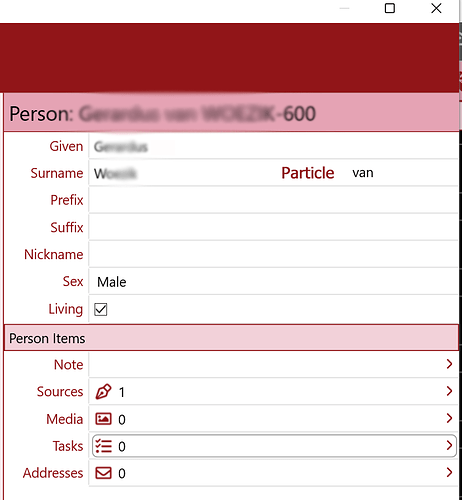 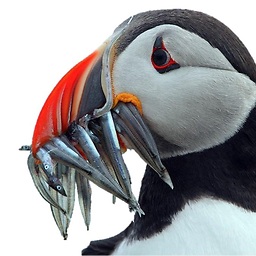 How should 'van'-names be ordered in a bibliography?

It seems that the Belgians and the Dutch do it differently but I am no expert!

As there doesn’t seem to be any hard rules about when these terms are used, perhaps a simple solution would be the addition of a sort name field in which is placed the name as the user wants it to be sorted as in the sort date versus the date of a fact.
Then it would be the user that determines the order when a sort of names is required . The software would need to develop a sort order for those names that don’t have a sort name associated, again like is done for dates, and then sort using a sort name if supplied.