I know this has come up before, but it has been several months since there was any discussion.

I have managed to keep myself busy with cleanup work and postpone any decision to deal with the new Citation Name field on Source Citations. Now that we have all had several more months of use, I am curious if anyone has come up with a meaningful way of using this field.

I’d be interested in hearing the answers too Paul.

I’ve been reviewing my citations and once the review / correction of the actual citation is finished, I’ve been changing the citation name. I find the system generated citation names overly long and sometimes confusing, and they tend to blur in a long list, hence the reason I’m changing them.

The “protocol” I’ve been using is, and bearing in mind I’m a “lumper”:

So a citation name for a document found on the Ancestry “London, England, Church of England Births and Baptisms, 1813-1917” database set is:

It’s quick to enter the name and I find it’s been really useful in identifying the citations for when I’m reusing or copying a citation. It’s also an indicator of which citations have been tidied and which still require review.

Well, I’ve tended to go my own way on parish registers, treating a (real) source as all the registers of a particular type - baptism, marriage or burial - for a particular church as a single source. Then using the citation fields for the name (two in the case of a marriage); the volume (year range) and reference to the particular entry.

For my historical reasons, for some sources I only have 2 citation fields in the source template, for others 3, so the number of semi-colons varies. Some would say that the duplication of using Baptisms twice is unnecessary.

In the static source details fields, I explain where the information was obtained - Ancestry, Family Search, Lancashire Online Parish Clerk, or whatever, depending on the church - but to my mind the original source was the church.

I reverse the names as the list of citations for a source can become quite large and it is easier to find a particular entry if they are in a usable order.

Just one way of many, but that is my approach.

One other thing that I think should be added is that for those that do choose to follow the citation naming conventions that have been ported from RM7, should be provided with an easy pathway to do so.

That is, I think the citation name should automatically prepopulate as the various citation template fields are completed.

That is, I think the citation name should automatically prepopulate as the various citation template fields are completed.

I have also requested that there should be the option to use the template language to format the citation name according to one’s specific requirements. These 2 changes would result in the citation name field working in the same way as the footnote, short footnote and bibliography.

I have also requested that there should be the option to use the template language to format the citation name according to one’s specific requirements. These 2 changes would result in the citation name field working in the same way as the footnote, short footnote and bibliography.

That sounds like a very good way to build the Citation name. It would read the way each user wants it to be.

Thank you for declaring your Lumper Status, as that explains your implementation, which I’m sure works quite well for you. Myself, I am an extreme splitter, so I really do not need to use anything from the Source or Citation Details to identify my Citations. For the most part I only have a single use for each Citation. If I could see the Use information from the list of Citation Names for a Source, I wouldn’t need a Citation Name.

So, for now, I am basically replicating the information in the Use Listing in the Citation Name:

However, I am questioning if I am going to want additional information because of some use I haven’t gotten around to using, yet. Hence, the reason for this thread.

That’s excellent JP1 and I’m glad you’ve taken the initiative and suggested this enhancement - I’m sure many will be grateful if it’s implemented!

Ah that makes sense Paul - being a lumper I hadn’t thought that if you are a splitter there is really no need for identification in the citation name.

And like you, I’m interested to hear other ideas in this regard as there is this nagging thought I’ve overlooked something…

Jill,
I too am a lumper and have been changing my citation names to include the

The source document reference number is just a numbering system I’m using to identify people and documents. It works for me, but I have a very small database (just hit 1,400 people!) and I do not see it expanding much beyond that. I don’t know if it would work so well with larger databases. I also file documents for each person (rather than by family or by document type).

There are definitely anomalies with it, but they’re (mostly) consistent (!), so again it seems to work.

The 8 digit document reference number is composed as follows:

So in the example above A0093C02 tells me the document is a parish baptism for Samuel Arnold (I actually mistyped the number when putting up the post!). A0093S03 would be the 1861 England census for Samuel Arnold.

The thinking behind it was that the media could be searched 2 ways – leading letter / numbers (“A0093”) would find all documents for Samuel Arnold, but if I searched for “C01” I would find all the birth certificates I have for everyone in the tree.

It also means in RM8 that I can confirm and link a document to a citation as they both have the same number. (The media tags in RM8 only specify the source, and not the citation, unless you click in to edit it when you can then see the citation name).

The number system was also brought in to save on the number of characters used in the media filename (I understand there is a limit of 256 so didn’t want to compromise this with a long media name). And I have 10 James Butler’s in my tree, all from the same area, so I needed a way to distinguish them! The reference number does this. I also use the reference number as a prefix to tasks / research folders etc too.

In having said that the citation name is repetitive – the document number already tells me what it is, but I have added the name, document type (that sort of derives from the source), date, and place, so I know I’ve correctly picked up the right one when reusing / copying the citation.

I must admit that like you I only find the source attached to a citation by going into the Edit Source area. But the 3 digit suffix (C01 etc) also tells me what sort of document it is and hence the likely source. This could be refined to provide more surety about the source, but so far I’ve found I’ve not needed to do this.

One thing I have found though is that if I run a “find everywhere” search of the reference number (A0093) I’ll find the person, tasks, and media but not the citation name. Seems “find everywhere” does not search and report this field. If it did, it would then provide the link back to the source! I’ve been meaning to put in an enhancement request covering this aspect.

Thanks JillV for sharing how you label/store your document files. I really like to see what others are doing as an example for me. I store mine as follows:

I use this for my source and citation names and to organize my media files. I don’t really organize from the citation caption as I want something like Birth Certificate to print out in the Scrapbook.

Thank you for sharing your system. It helps me clarify what I was trying to do is create a “master source” reference number system. Something I could include in the citation name so I could readily identify what master source the citation was created from. I had not thought about the source document itself and the fact that the media tags do not show the actual citation. Will need to “ponder” a bit more before proceeding.

You’re welcome @Cwhermann28 Cwhermann28 – I’ve been using this for years and whilst it’s worked, I’m sure there are things I’d do differently if I started over! I do need to refer back to the spreadsheet to work out who D0015 is, but it’s also amazing how the direct line numbers stick after you’ve been working with them for years! @JohnRF 's system overcomes that obstacle and ties neatly back to the RIN! (Thank you for sharing this John!)

And there’s definitely something to be said for pondering a while and trying different ideas before proceeding – it saves lots of work down the line!

And one other aspect that I had to ponder, and you might need to too, was how to reference media and citations for places (those that aren’t tied to any specific person such as a local history document or a general historic photo of a place). I’ve created a reference numbering system for places (and place details) but I’m not altogether happy with it, cause even I get confused sometimes!!

Hi Paul. If you’re an extreme splitter, is there any need to have a ‘citation name’ field at all? What if you just remove it?

If you’re an extreme splitter, is there any need to have a ‘citation name’ field at all? What if you just remove it?

I don’t know! That is my point, I cannot find a definitive explanation of what the field is used for. However, if I chose to Re-use Citations, I believe it would be helpful in selecting the Citation to re-use. Beyond that, I’m not sure what it is used for.

I do splitting and lumping. For the split sources, I copy the source name into the citation name. That way, it show up in the dialog box when pasting a copy of the source.

Hi Paul. If you’re an extreme splitter, is there any need to have a ‘citation name’ field at all? What if you just remove it?

Because I have found another use for it, even when splitting. I use the Research Note to record a transcript of the information the Source provides to the Citation. I record the Person(s) name and the Event Type in the Citation Name field, followed by a condensed, standardized version of the Research Note. Then from the Edit Person Screen I can use the Slide Out Workflow Option to get a nice list of all the sources for the event and what each Source contributed. If only I could manually rearrange them I would have a wonderful analytical tool. 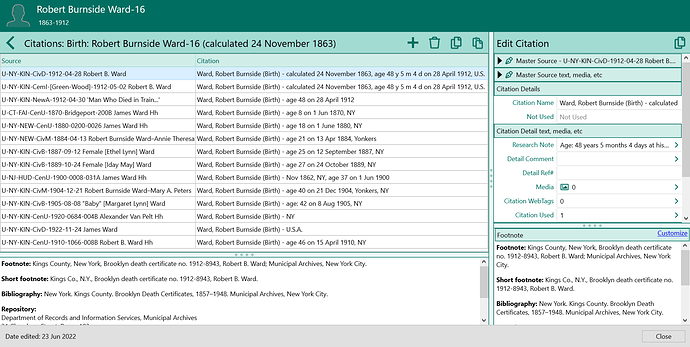