I expect to get flak from Genealogist purists on this and it’s not really a tip. I need to see the married names along with the surnames for females and for now decided to place the married name in (Stevens) in the Suffix. The name is then listed by surname and (Stevens). I know that the name in parentheses is the married name. This helps me a lot and decided that it works for me. For now. I do end up with several “Surname” Alice (Stevens) at top of people list but that just provides incentive to find the surname of that female. A crazy solution but it works for me, for now.

If it works for you, great! I give the woman her maiden surname (or five underscores _____ if unknown), a Marriage or Relationship date (with ABT or PRHPS if the date is only known approximately or not at all) and an Alternate surname of her Married one and there’s a drop-down to pick that status from. Then I can pick her up in the Index under either name: + in front of her name means it’s the alternative one. 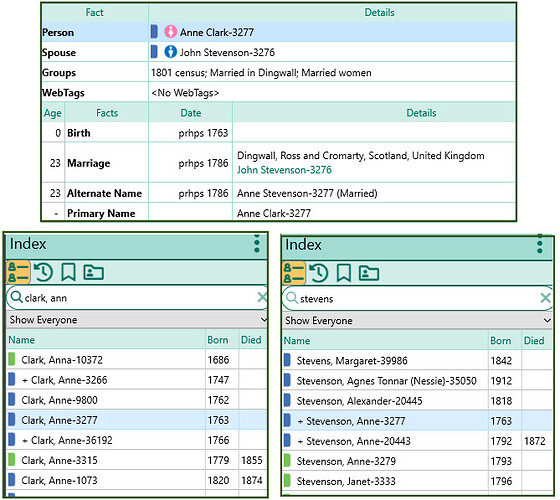 You can use SQLlite to give all married women the alternate name of FirstName MarriedLastName: https://sqlitetoolsforrootsmagic.com/?s=add+married+name
You would need to do this periodically to update any married women’s name since the last time you ran the query. It works great! That way you can see the woman in the Person selector under both her maiden and married names.

Yes but, doesn’t that add the same person with two different names on the list?

I am studying your idea but that adds a lot to the list. I am just now understanding how the alternative name will work in the list. Thanks for responding. I am interested in the different ways genealogist solve this problem.

My local-area database has 41,000 names that include 11,000 ‘families’ (ie couples) using 8,000 Alternate Names, but since they are part of 141,000 ‘events’ (ie Facts I assume) they’re not adding much of a burden. Now that I’ve written that out I must look through them to see how many of the (11k-8k=) 3000 couples should have an Alternate Name, they can’t all be parents of illegitimate births!

After reading through the discussion on this topic I am still sticking to my method until I find out why I don’t want to do it this way. I add the married to the suffix in ( ) that then lists the female as
Given, Surname/Maiden name, and (suffix/married name).
on my list of people, I have only one name for each person and no alternatives because the married name shows in parenthesis at the end of each female’s name. This helps me to know right away who the female “belongs” too, so my brain does not get too boggled.
I also add nicknames, both genders in " " beside formal given name so it is where I need to see it.
Call me crazy and maybe I’ll be sorry later but for now I see
Sarah “Sadie” Mansur (Chalifour)
one time on list with everything I need to know about her. It may mess up my research, but I have not seen this yet and I know instantly who she is.

I’d love feedback on why this is a bad idea.

The reason I wouldn’t use this method is because I want to use third party hinting. Adding the surname in the suffix field will throw off the results. It’s best to stay with their birth name. Hinting will take the spouse’s name into consideration so its not necessary to add it.

It’s not a bad idea if it works for you–only thing is if you upload a tree to Ancestry etc–it is going to show up as Sarah “Sadie” Mansur (Chalifour) on these sites —BUT it doesn’t seem to cause any problems if you do a search on Ancestry-- personally I do it all the time BUT mine say something like Sarah ( questionable) Long-- or not proven or even DNA Match-- if I had say 15 Franklin Marion Bass --all born abt the same time, I might put the wife’s name or county born but those trees are not online…

Only problem I can see is when you hand down your file to the next generation/ distant cousin–if your not around to explain the (Chalifour), how would they know?

Second problem–what do you do when a woman was married 5 times? and all are relevant? i e father/ stepfather that raised you / stepfather who was like a dad etc

I usually use the ALTERNATE NAME to put in married names. If the female has been married multiple times, I use the form of:
Alternate Name
Given Sarah Example (maiden name) married1 Married2 married3
Surname: Last known surname

If I have an unknown maiden name, I put in:
Alternate Name
Given: Sarah ( )
Surname: Married name
This helps when I see an obituary that I think should belong in my file.